ECOWAS Court Orders Nigeria to pay N30 Million to Mrs. Helen Joshua For Unlawful Murder of her Son by A Soldier 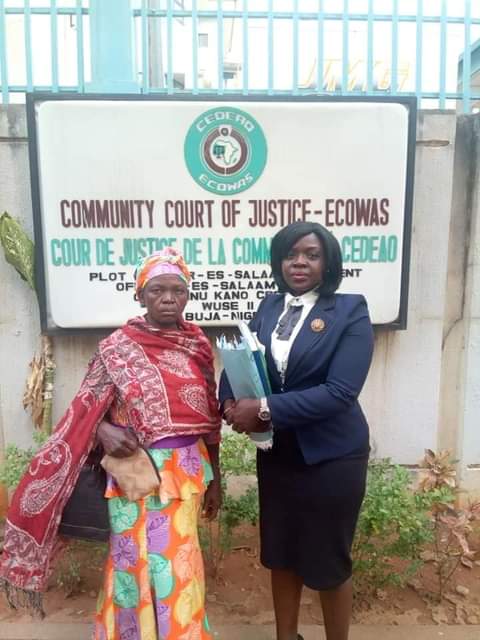 The Economic Community of West African States Court (ECOWAS Court of Justice) sitting in Abuja- Nigeria has on Tuesday 15 February, 2022 delivered a judgment in the Case of Mrs Helen Joshua & 1OR V. Federal Republic of Nigeria ECW/CCJ/APP/13/18.

The Court which entered Judgment in favour of the 1st Applicant and against the Respondent, directed the Federal Republic of Nigeria to pay N30 Million naira ($75,000) as compensation for the wrongful killing of Solomon Andy, a young Nigerian who on 9 June, 2017, was killed by Private Abel Ocheme, a soldier attached to Command Secondary School Kaduna. The trigger- happy soldier had killed the victim while he was packing sand from a gutter close to the soldier’s duty post.

Delivering the Judgment, Justice Keikura Bangura who read the Court’s Judgment that had in coram, Justice Gberi de Ouattara and Justice Silva Moreira Costa, upheld the arguments of Gloria Mabeiam Ballason Esq, Counsel to the Applicant and found that the killing and confiscation by the 1 Division of the Nigerian Army of the body of the victim who was poor, defenseless, harmless and out about eking out a means of livelihood, was unlawful, cruel, inhuman and degrading.

The Court further found that the Federal Republic of Nigeria failed to uphold its obligations under, Articles 1, 4, 5 & 12 of the African Charter of Human and Peoples’ Rights which mandates States to protect the sanctity and dignity of every life and stated that the Nigerian State owed Solomon Andy a duty of care which it failed to discharge and did not show the requisite abhorrence for the violation of the right to life of her citizen.

The Court found as “grossly humiliating and a violation of the right inherent in man” for the Nigerian Army to confiscate the body of Solomon Andy and leave it in an advancing degenerative state of disrepair since 9 June 2017 when the killing occured till the time of the judgment. Accordingly the Court ordered the Federal Republic of Nigeria which was represented by Maimuna Shiru Esq, to pay N25 Million naira only to the 1st Applicant as compensation for the wrongful and unlawful killing of Solomon Andy, N5million naira only as cost of burial and to immediately release the body of the deceased and comply with all orders of the Court.

Responding to the Judgment, Ballason who is Counsel to the Applicant, thanked the Court for its eventual but sure arrival to justice in the matter stating that the judgment will go a long way in reinforcing the value of a Nigerian life and the worth inherent in all humans.