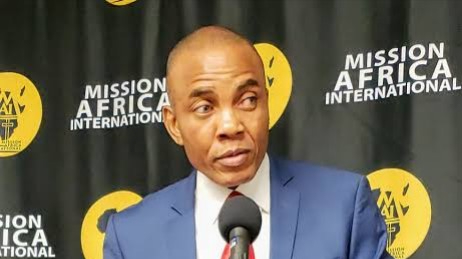 Each time I read about people praying for Nigeria, my mind immediately scans the atmosphere to determine whether it is out of ignorance, dishonesty, hypocrisy or naivety, for no one in his or her right mind will be praying for a violent Criminal Enterprise to prosper.

It is now beyond debate that the Federation of Nigeria died in 1966 but the carcass of that dead Federation was hijacked in 1967 by the Caliphate and forcefully kept in place under the codename: One-Nigeria, in circumstances that represent death, enslavement and bondage for the indigenous constituent components of the defunct Federation of Nigeria.

In the midst of the Massive Ethnic Cleansing Onslaught by the Invading Fulani, aided by the Fulani-controlled “Federal Government” and the Military of Nigeria, it is most horrifying to see that there are some of our brethren who are still unable to see that the man-eating monster we have now, masquerading as “Nigeria” anchored on a foundation of the fraud called “the 1999 Constitution”, is totally different from the dead Federation of Nigeria which may be the object of their prayer.

When we describe the Unitary Nigeria defined by the 1999 Constitution as a violent Criminal Enterprise, it is because the massive bloodshed by which its Fulani Caliphate proprietors enforce their will against the indigenous constituent components are no different from the methods employed by a Robbery Gang that routinely kills, maims, rapes and plunders, just as we currently witness in the Plateau, Southern Kaduna and elsewhere particularly in the Middle-Belt and Southern Nigeria.

What makes any prayer for the current unitary Nigeria an abomination before God?

We may not have adverted our minds to it before now but let it be known to us that the Ten Commandments we read in the Bible are for Nations as they are for Men.

If we want to know why Nigeria is the sorry state it is in now, let us juxtapose Nigeria with a few prosperous countries of the world (for instance the US, Israel, Germany) and let us examine what each country is doing in obedience or disobedience of each of the Ten Commandments.

Let us take a few specifics:

Many here may not know that Germany is the only country in the world that raises and dedicates a portion of its income to what could be compared to tithe.

While many successful Countries of the world do everything to preserve human lives, Nigeria kills for sport.

In keeping with this Commandment, most of the States in the US outlawed capital punishment from their statute books but Nigeria is everyday adding new crimes to the list of offences that carry capital punishment including armed robbery, kidnapping, drug peddling and the like.

For a country with zero-social security for citizens, the criminals produced by the totally dysfunctional Nigerian State only grow more violent and so, blood is flowing all over the place.

Nigeria not only steals, it robs for a living.

How, you may want to ask; It is robbery for the Caliphate Nigerian State to forcefully hijack, confiscate and commandeer the proceeds of the sale daily, of two million barrels of crude oil that belong to the Niger Delta every day or to seize by the Exclusive List in its 1999 Constitution, the limestone of Benue which it allocates to Dangote to make him Africa’s richest man, having similarly confiscated the maritime assets (ports) of Lagos and Port Harcourt which it allocated to same Dangote and Atiku (Intels) in the name of “port concessions”, but always ready to hound, criminalize and behead the Ken Saro-Wiwas, the Sunday Igbohos, and the Samuel Ortoms who attempt to protest the brazen robbery.

(4) “Thou shall not bear false witness against thy neighbour”

The 1999 Constitution upon which Nigeria is currently constructed, begins with two egregious false claims that “we the people” willingly agreed to a Union, submitting our Sovereignties therefore, and that “we made, enacted and gave to ourselves” that Constitution.

There is no worse false witness than that borne by the Nigerian State against the over 200 million people in the Preamble to Nigeria’s 1999 Constitution who have been shouting from the rooftops that they never agreed to any Union and that they never made any Constitution.

Yet the Church in Nigeria keeps mute over this open contest between the truth that the Nigerian Indigenous Nationalities Alliance for Self-Determination (NINAS) is proclaiming, AND the falsehood that the Nigerian State and its proprietors are forcefully clinging to.

(5) “Honour thy father and thy mother, that thy days may be long”

Compare what the successful countries of the world are doing with their senior citizens with what Nigeria is doing with its own senior citizens, particularly pensioners, who having toiled for decades for Nigeria, are owed, humiliated and disgraced to their death by an ungrateful and unconscionable Nigerian State which celebrates the looters of pension funds.

On the other hand, in Israel, not only does the State take care of the welfare and health of its senior citizens, Israeli pupils, as a part of their school curriculum, are assigned in groups on a routine basis, to spend time with their seniors whose children and grandchildren might have left home for work in other locations and to set up their own families. Those seniors who might otherwise have been consigned to Old People’s Homes, would instead share the fascinating story of their country with the kids and so there is a mutual reinforcement of faith and belief in the country.

If the reward for obedience to this particular Commandment is long life, do we need a clairvoyant to explain to us that the penalty for breach is a life that will be cut short whether that of the offending individual or country?

We could go on to the Tenth of the Commandments but let us for the sake of brevity stop at Five.

Is anyone still wondering why the violent Criminal Enterprise we call Nigeria is bleeding to its death and why its trapped constituent components are living in abject poverty, fear and mass misery for a country that is so profoundly endowed with both human and material resources?

The reason for this piece is to caution the Men of God who keep mute over the many atrocities of Nigeria and over the raging disputations about the fraudulent constitutional basis of Nigeria but who regularly gather people to mock God in the name of praying for Nigeria.

Such Prayers can only be Abominations in the sight of God.

The task of the Men of God in Nigeria at this time, must begin with helping to extinguish the source of the evil in the land which is the fraudulent constitutional foundation upon which Nigeria is currently erected.