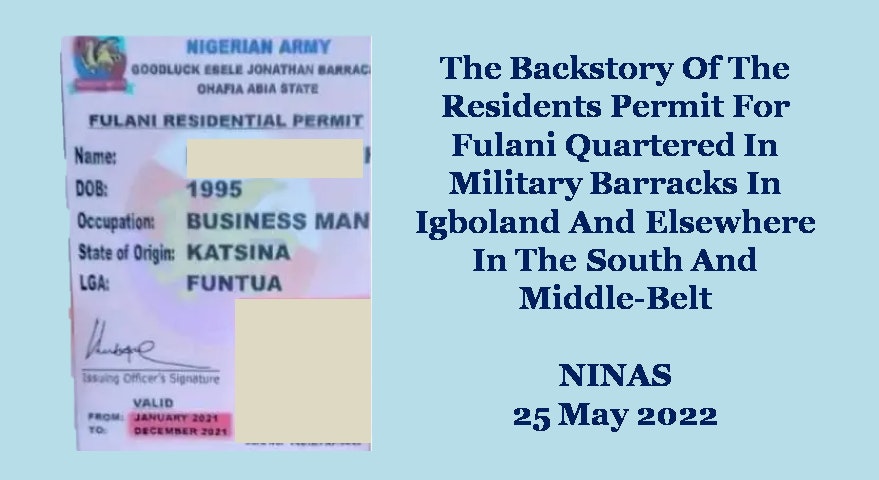 As the LNC and its NINAS Allies blocked the first few steps of newly installed President Muhammadu Buhari to launch his FULANIZATION and RUGA Campaign after he violently took power in 2015, Buhari in some kind of exasperation, openly directed that all the bushes behind all the Military Barracks across  Nigeria (traditionally used for training exercises) should be used to as Temporary Ranches for the large army of “Fulani herdsmen” who had turned up everywhere, but who were being resisted everywhere they went, pending the establishment of the RUGA (Fulani Colonies), the Buhari Government and its Military and the National Assembly were forcefully pushing to establish across Nigeria.

The lost but found Identity/ Residents Permit from the illicit Fulani resident in the Army Barracks at Ohafia is evidence that the said Buhari directive was carried out, and an unquantified number of Fulani invaders are now ensconced in the bosom of Military Barracks across Nigeria.

It would be recalled that sometime in 2021, there was an incident in Okitipupa where a large convoy of buses had brought in  and discharged Fulani young men into the Army Barracks there, prompting widespread alarm by local vigilantes and indigenes who had been rebuffed and turned back as they sought explanations from the Military Base where these Fulani passengers were taken into. The story was all over the internet at the time.

I made this note to alert us that while we distract ourselves with the feel-good noise of “Biafra Nation” and “Yoruba Nation” and impede the task of the strategic pushback required [for that wanted  Self-Determination], our adversary is digging in and deep into our midst in a manner that further compromises our already precarious security situation.

For the non-Caliphate rest of Nigeria, with the complete DELEGITIMIZATION of the 1999 Constitution already accomplished by the Nigerian Indigenous Nationalities Alliance for Self-Determination (NINAS) the only viable remediation strategy on the Table right now, against the unfolding catastrophe of Fulani murderous conquest invasion is the immediate ENFORCEMENT of the December 16, 2020 Constitutional Force Majeure (CFM), to immediately render the presence of the Fulani, in and out of uniform, ILLEGITIMATE and UNTENABLE throughout the Alliance Territories, until the Union Dispute raised by that CFM is resolved by REFERENDUMS.

Faster than any other mechanism, it is also this enforcement that will IMMEDIATELY activate the armed Self-Defence component of the right to Self-Determination currently being asserted by Nigeria’s  indigenous nationalities in a manner to upend the instant criminalization of any effort at armed Self-Defence under the defeated 1999 Constitution.

As usual, those who wish to argue are at liberty to go ahead but it is only a matter of little time for things to crystallize beyond debate, but the cost of ignorance and delay will be reckoned in blood.