1999 Constitution Of Nigeria: Power Of The Peoples Against Power Of Politicians 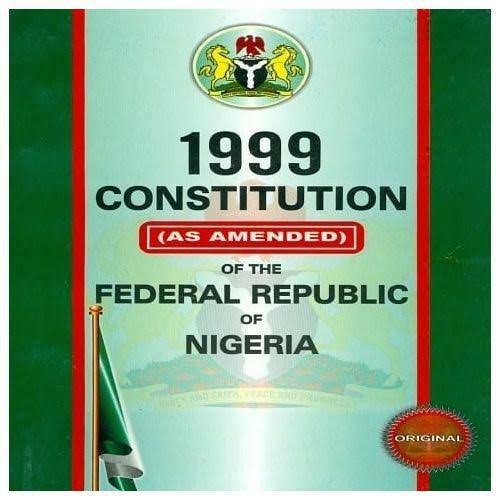 Firstly, it is not correct to describe Nigeria as a “nation”. It is a pseudo-country. Country – because it is an amalgamation of several ethnic NATIONS, where each indigenous ethnic nation could have been a country in its own right. Pseudo – because this country is based on a false Union Agreement.  That is, the 1999 Constitution that creates the Union is a forgery, and was not obtained in the correct way that a Constitution ought to be.  It is actually Military Decree 24. In their Communiqué after a meeting about security and the future of Nigeria on 13th December 2021, attended by former President Obasanjo, the Sultan of Sokoto, Rev. Pam Yakubu, Gani Adams, Madam Ankio Briggs, and many others, the 1999 Constitution was described as, “Oligo-military in nature and not representing the collective interest of Nigerians…”.

In fact, General Abdulsalami Abubakar who was involved in foisting that forgery upon Nigerians wrote a statement on 5th May 1999 saying that the 1999 Constitution is a Schedule of a Military Decree as follows:

1.         (1) There shall be for Nigeria a Constitution which shall be as set out in the Schedule to this Decree.

(2) The Constitution set out in the Schedule to this Decree shall come into force on 29th May 1999.

(3) Whenever it may hereafter be necessary for the Constitution to be printed it shall be lawful for the Federal Government Printer to omit all parts of this Decree apart from the Schedule and the Constitution as so printed shall have the force of law notwithstanding the omission.

2.     This Decree may be cited as the Constitution of the Federal Republic of Nigeria (Promulgation) Decree 1999.

Secondly, it is not correct to say that Nigerians are just now faulting the fraudulent 1999 Constitution after 23 years of its existence. It is simply that the mainstream media has been one-sided in its reporting: broadcasting what politicians want to be put out into the public space, yet being silent when it concerns what the ordinary peoples are doing, and what they want for themselves, like Self-Determination for their ethnic nation. For, soon after the 1999 Constitution was imposed, some Nigerians with a conscience and a sense of right and wrong like Chief Anthony Enahoro and Professor Wole Soyinka among several others, complained and were involved in finding a way to terminate this fraud starting with the post-NADECO period of 1999, and spanning through PRONACO (2005 – 2006). Then MNN took over (2006 – 2018) which became the NINAS Movement from 2018. As MNN, indigenous peoples of Lower Niger, Yoruba, and Middle Belt Blocs had rejected and Repudiated the 1999 Constitution during their Solemn Assemblies (2015, 2017 and 2018 respectively), and also during the Lagos Declaration of 2011, and the Freedom Park Proclamation of 2018. Besides this, Lower Niger Congress (LNC), the lead Self-Determination organisation had regularly published what the peoples wanted and were doing to terminate the sham 1999 Constitution, on their websites, plus on the NINAS website.

What we see is that since the fraudulent 1999 Constitution was imposed, politicians of the NINAS Territory ie, the South and Middle Belt have been playing the role of God by usurping Sovereignty and preventing Self-Determination, to instead place upon the peoples the yoke of under-development, corruption, and terror, which are the consequences of the 1999 Constitution. Having so far been successful at denying their peoples the right of Self-Determination, politicians think that they can continue with this status quo, and carry on with the treasonous action of swearing an Oath of Office to uphold a forgery (the 1999 Constitution) in their people’s ancestral lands. It involves politicians of the NINAS Territory being in denial that Nigeria became a Disputed Project from 16th December 2020 when a Constitutional Force Majeure was proclaimed by the NINAS Movement. It involves continuing to be in denial that there is a Union Dispute still unresolved since 1966 when the Military coups terminated the Federation of Nigeria, and which Union Dispute is seen in the outright lies of the Preamble of the 1999 Constitution. In fact, since politicians of the South and Middle Belt have chosen to uphold and defend the swindle called 1999 Constitution, they then have to add falsehood onto falsehood to keep that illegitimate Document operating in their people’s ancestral spaces.

What will be unfolding over the coming months is this: Who is more powerful – is it the politicians of the NINAS Territory who insist that their peoples do not deserve their inalienable right to Self-Determination? Or is it the peoples who will rise up to put a stop to the lies, frauds, and treachery of their politicians?

The non-violent NINAS Movement has put a solution on the Table where nobody needs to get a bloodied nose. Politicians would have to suspend their politicking (they can carry on again later when new authentic Constitutions have been made in the proper way), and halt preparations to Elections 2023 as that would renew the life of the illegitimate 1999 Constitution that has been Repudiated. Instead, there would be a TRANSITIONING PERIOD with a Transitional Government as well as a concurrent Sovereign Transitioning Convention (this writer’s description, NINAS will provide the right terminology at the appropriate time). During the Transitional Government current office holders would remain in their positions. The Sovereign Transitioning Convention would be similar (but not identical) to South Africa’s CODESA. It is at this Transitioning Period that the Union Dispute would finally get resolved, and indigenous Ethnic Nations of the NINAS Territory would decide by Regional Referendums whether to re-commit to the Union of Nigeria, or whether to go for something else – new unions with compatible neighbouring ethnic nations.