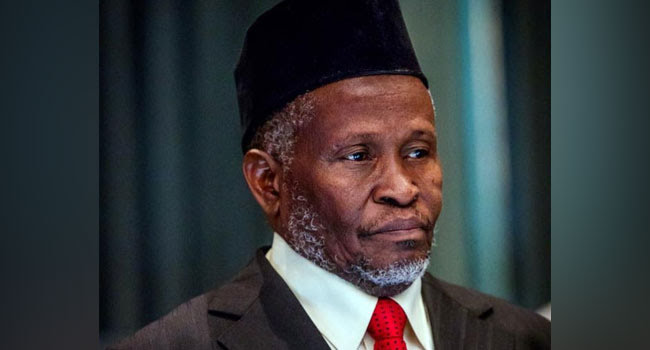 Civil rights advocacy group, Human Rights Writers Association of Nigeria, (HURIWA) on Monday, said the resignation of Justice Tanko Muhammad as the Chief Justice of Nigeria was not enough to clear him of corruption allegations levelled against him by the 14 justices of the Supreme Court.

HURIWA’s National Coordinator, Comrade Emmanuel Onwubiko, in a statement, demanded the immediate arrest, investigation and if culpable then prosecute the retired CJN Tanko by the Economic and Financial Crimes Commission and the Independent Corrupt Practices Commission.

Recall that the 14 Supreme Court justices recently petitioned Tanko and alleged that he diverted their welfare funds.

“Your Lordship totally ignored this demand and yet travelled with your spouse, children, and personal staff. We demand to know what has become our training funds, have they been diverted, or it’s a plain denial,” the justices had asked.

Though Tanko denied the allegations, HURIWA earlier asked the National Judicial Council and the Code of Conduct Tribunal to probe him over the weighty allegations by the Supreme Court justices.

On Monday, news filtered in that Tanko has resigned as the CJN as confirmed by his Special Assistant on Media and Communication, Yusuf Isah.

“The latest information is that the CJN has resigned; I spoke with somebody very close to him and he said he has resigned,” Isah said.

Reacting, HURIWA’s Onwubiko applauded the swift action of the President to have sworn in Ariwoola as the acting CJN.

He, however, said, “The resignation of Justice Tanko Muhammad as the Chief Justice of Nigeria is not enough; the EFCC and the ICPC must swing into action, investigate then if a cause if Acton is ascertained, then arrest and prosecute him over the corruption allegations levelled against him by the 14 justices of the Supreme Court if a prima facie evidence exists .

“Jistice Tanko must be prosecuted just as his predecessor, Walter Onnoghen, who was probed and later removed on a controversial note following some allegations against him which was probed by both the NJC and the CCT.

“The investigation and probable prosecution of Tanko if indicted,  will set a precedent that Buhari’s anti-corruption crusade is not a joke unless it is a joke. Tanko’s prosecution if found culpable of those sets of allegations will also serve as deterrent for any proven corrupt justices that the judiciary won’t be a haven for scoundrels.”