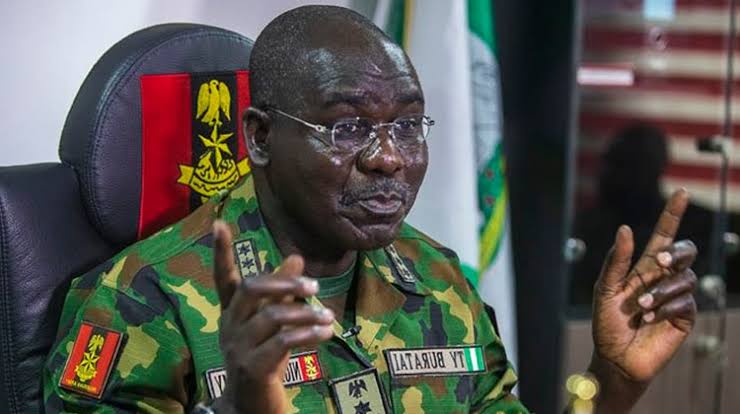 Civil rights advocacy group, Human Rights Writers Association of Nigeria, (HURIWA) on Wednesday, said it has uncovered a systematically hatched and well coordinated media campaign by some Abuja moneybags who have insisted on smearing the reputation of the former Chief of Army Staff, Lt. Gen Tukur Buratai (retd.).

HURIWA’s National Coordinator, Comrade Emmanuel Onwubiko, in a statement, urged the media not to fall for the sponsored coordinated attacks against Buratai despite that the Independent Corrupt Practices Commission has not indicted him of any corruption allegation. HURIWA regrets that some online media have already been bribed to disseminate falsehoods against General Buratai.

Recall that the ICPC busted the Wuse house of a military contractor and made some startling discoveries but despite that the anti-graft agency made clarifications as to the owner of the house, some groups have continued to call on ICPC to change the outcome of the investigation so as to name Buratai as the owner in clear violations of the global best practices and the ethics. These groups are apparently purchased and paid by the said retired military General who is a senior Aide of President Muhammadu Buhari.

HURIWA’s Onwubiko said, “We have on good authority that a retired military general working directly in the office of President Muhammadu Buhari  has been sponsoring a campaign of calumny against retired Lt. Gen Tukur Yusuf Buratai with a criminal attempt to link his name with the ownership of the house in Wuse in which it was said that ICPC found some amount from a military defence contractor.

“HURIWA also have on good authority that the retired military officer in Presidency allegedly released N10 million to some Abuja and Lagos-based groups with extensive contacts within the Nigerian press to continue the campaign of calumny against General Buratai all in an attempt to sully his image. The reason for doing is his perception that Lt.Gen Tukur Yusuf Buratai may have been pencilled down as potential running mate to the Presidential candidate of the All Progressives Congress given that the former Army Chief since retiring has devoted substantial part of his time and resources supporting and building up the All Progressives Congress in all nooks and cronies of the North East, North West and North Central regions of Nigeria and is not known to be fanatically attached to his religion but he is a profoundly regarded nationalist.”

“The retired general is apparently threatened by the rising profile of General Buratai has he is being pencilled down as potential running mate to the All Progressives Congress Presidential Candidate, Bola Ahmed Tinubu. The military retired General who is bankrolling this campaign of calumny is also accused of several heists of public funds which he has denied publicly.

“HURIWA warned that civil society organisations should live by the ethics of professional conducts and not be used by moneybags to achieve selfish motives. Besides, HURIWA said a coalition of activists determined to restore sanity and professional ethics of the media practice are meeting to institute a class suit to try to stop some notorious media houses from spreading fake news.”

“General Buratai is also encouraged to pursue legal action against defamatory reports against his person.”