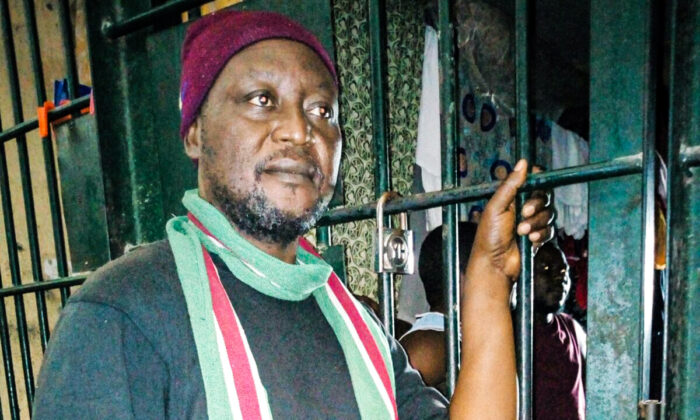 Prominent Civil Rights Advocacy Group:- HUMAN RIGHTS WRITERS ASSOCIATION OF NIGERIA (HURIWA) has asked the Kaduna State police Command to release forthwith the National publicity secretary of the Southern Kaduna Peoples Union Mr. Luka Biniyat.
HURIWA said the reported detention for over five days of the senior Southern Kaduna born Journalist and activist on the alleged order of the State Commissioner for internal security on the accusation of defamation, amounted to abuse of power.
Specifically, the Kaduna State commissioner for internal security Mr. Samuel Aruwan had on November 7th 2021 alluded to his role in the detention of Mr. Luka Biniyat in a briefing he gave to journalists in Kaduna as follows:
“I wish to address you this afternoon on recent disturbing allegations leveled against me, amounting to defamation of character, injurious falsehood and incitement of public disturbance.
On 29th October 2021, my attention was drawn to an online publication authored by one Luka Binniyat. In this publication, Mr. Binniyat quoted Senator Danjuma Laah of the Southern Kaduna Senatorial District, as stating that I am being used to cover up genocide against Christians in Southern Kaduna.
Before questioning the veracity of the purported statement, I am supremely concerned first, for the implications of such a statement on the peace and security of our state, because of the religious and ethnic sentiments it has conveyed.
Furthermore, as a passionate journalist on leave of absence in public service, I am acutely aware of the burden of professional responsibility which must accompany accurate reportage for the consumption of the public”, Mr. Aruwan claimed.
HURIWA has however faulted the resort to self-help by the Kaduna State Commissioner for internal security for purportedly deploying the services of the Kaduna State Police Command to clamp into detention someone he accused of defaming his person instead of following the due process of law.
HURIWA argued that the principle of rule of law makes it incumbent that he who alleges must prove his allegations in the competent court of law and not through what seemed like the manipulation of state security apparatus to pursue personal matters.
HURIWA quoted the Black’s Law Dictionary, to have affirmed that “Defamation” means “Holding up of a person to ridicule, scorn or contempt in a respectable and considerable part of the community; may be criminal as well as civil”.
HURIWA asserts that Defamation is the unprivileged publication of false statements which naturally and proximately result in injury to another. A communication is defamatory if it tends so to harm the reputation of another as to lower him in the estimation of the community or to deter third persons from associating or dealing with him. The meaning of a communication is that which the recipient correctly, or mistakenly but reasonably understands that it was intended to express. It is important to note that Libel and Slander are both methods of Defamation, the former being expressed by print, written pictures or signs: the latter by oral expressions or transitory gestures Defamatory Statements may consist of libel (written publication) and slander”.
HURIWA cited the case of AYUBA v. SULE (2016) LPELR-40263(CA) whereby it was held that “The first requirement that is essential in slander is malice. To succeed in a case of slander, the plaintiff must prove-the words spoken, communication of the words to a third person, falsity of the communication against the plaintiff, damage must be proved except the slander is actionable per se, the actual words spoken should be reproduced in the language spoken with an English translation. AMAHAGWU V. NGWOKOR (2004) ALL FWLR (PT.219) 1091 AT 1098, YESUFU V. GBADAMOSI (1993) 6 NWLR (PT.299) 363. In THE SKETCH PUBLISHING CO. LTD. AND ANOR. V. ALHAJI AZEEZ A. AJAGBEMOKEREF(1989) 1 NWLR (PT. 100) 678I, the word defamation is defined as “a statement which if published of and concerning a person, is calculated to lower him in the estimation of right thinking men or cause him to be shunned or avoided or to expose him to hatred, contempt, or ridicule or to convey an imputation on him disparaging or injurious to him in his office, profession, calling, trade or business.” The Rights group therefore expressed consternation that the Kaduna State internal security commissioner is attempting to elevate his personal civil matter into a matter between citizen Luka Biniyat and his agency which is absolutely unlawful and unconstitutional.
“According to a plethora of decided cases, it has been held that in order to succeed in an action for defamation, a plaintiff must prove that the libel or slander has been published, that is communicated to some other person or persons other than the plaintiff himself. See UGO V. OKAFOR (1996) 3 NWLR (PT. 438) 542 AT 560”, HURIWA asserted.

HURIWA has also condemned the illegal detention of Luka Biniyat beyond the time frame allowed undet the law.
HURIWA said: “”The 1999 Nigerian constitution clearly states that persons arrested or detained shall be brought before a court within a “reasonable time”. According to the constitution, the reasonable time means a period of 24 hours when a court of competent jurisdiction is within a radius of 40 kilometres to the police station or a period of two days in any other case.
Section 35(4) of the 1999 constitution states that: “Any person who is arrested or detained in accordance with subsection (1) (c) of this section shall be brought before a court of law within a reasonable time, and if he is not tried within a period of – (a) two months from the date of his arrest or detention in the case of a person who is in custody or is not entitled to bail; or (b) three months from the date of his arrest or detention in the case of a person who has been released on bail, he shall (without prejudice to any further proceedings that may be brought against him) be released either unconditionally or upon such conditions as are reasonably necessary to ensure that he appears for trial at a later date. Subsection 5 states that: “In subsection (4) of this section, the expression “a reasonable time” means – (a) in the case of an arrest or detention in any place where there is a court of competent jurisdiction within a radius of forty kilometres, a period of one day; and (b) in any other case, a period of two days or such longer period as in the circumstances may be considered by the court to be reasonable.” Section 61 (1) of the Nigeria Police Act 2020 agrees with the provisions of the constitution while stating that a suspect arrested without a court warrant, other than a capital offence, should be granted bail, where it is impracticable to charge to court within 24 hours.”
HURIWA therefore is demanding the immediate release from illegal police detention of Mr. Luka Biniyat since the plaintiff himself decided to take the law into his hand rather than follow the due process of the law by personally instituting either a civil or criminal case against the Defendant and accord him all the rights and privileges of fair hearing as provided for by the Grund Norm of the Federal Republic of Nigeria.