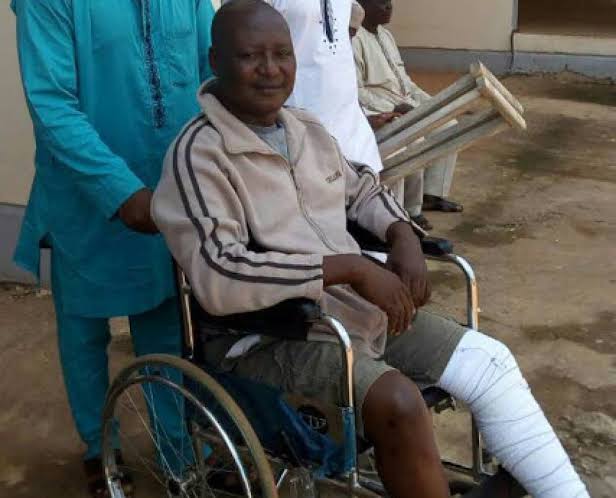 70 days after the arrest and detention of Epoch times reporter, Mr Luka Binniyat at the kaduna convict prison without trial, the deteriorating health condition of the 2017 award winner of the Nigeria union of journalist (NUJ) “The torch Bearer of Nigeria journalist” seem to be getting worse, prison source told our reporter.

Binniyat was seen being pushed on a wheel chair in the prison premises on Monday as the source said that the former chairman, correspondent chapel of the NUJ, kaduna state chapter, was battling a crippling leg infection.

This was even after it was reported last week that Binniyat was rushed to the prison clinic which had no drugs nor qualified and competant health workers after his inmates where alarmed by the suffering he went through over many nights.

The source said of Binniyat as fearing for his life remains unattended to by a qualified doctor as he has been unable to have any good sleep which May have dangerously heightened his blood pressure.

When contacted, his wife, Gladys Binniyat said that she has been unable to see her husband being the only visitor that is allowed to bring him food twice a week.

“He called me on Monday using the official prison number to my surprise and said that the prison officers in the clinic said that he should buy crutches,”she said.

“I bought the crutches and I have taken them to the prison, yet they didn’t allow me to see him.

“I am very disturbed over his health condition.” she said.

Binniyat’s lawyer, Barrister Ehizogie Fidelis Imadojemu, who also confirmed his deteriorating health conditions to this reporter, said he is worried about the journalist’s condition in prison nwith regards to the snail speed of his trial.

“Luka called me on Monday and told me about the condition of his health in prison, he told me he now uses wheelchair provided by the prison authority.

Barrister Imadojemu also expressed dissatisfaction with the way and manner his client’s case is going after 70 days in detention.

“During one of my regular visits to see him at the Kaduna Minimum Security Custodial Centre, he told me of pains he felt in his legs. In recent time, the pains have increased so that he now moves in a wheelchair.

“From what he told me, it’s an ailment that predates his recent arrest, detention and remand. He has not seen a Doctor. His only contact with a Health care provider in the Custodial Centre to examine the legs was not a Doctor or a Medical Practitioner, properly so called.

“He has had little or no medical attention. I am trying to speak to the authorities at the Custodial Centre so that he meets with a Medical Practitioner immediately as his health is deteriorating very fast.” He said

Barrister Imadojemu further said that charges were filled against Luka at the Federal high court in December but the case is yet to be assigned to s judge.

“Although Charges have been filed against him since early December of 2021, in Case Number: FHC/KD/79c/2021, the case before the Federal High Court, Kaduna, has not been assigned by the Presiding Judge or Senior Judge who normally assigns fresh cases. Consequently, no date has been fixed for his arraignment.

Recall that Journalist Luka Binniyat was arrested by men of the Kaduna state Investigation Bureau (SIB) on November 4 2021 over a news article he authored for New York based online newspaper, Epoch times.

Binniyat was alleged to have quoted Senator Danjuma La’ah, the Senator representing Southern Kaduna Senatorial District in a publication on the killings of 38 people in Madamai and Abun communities in Southern Kaduna in September 2021, a publication the Kaduna state commissioner of Internal Security perceived defamatory.