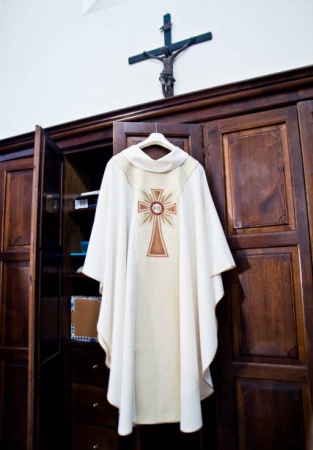 [ It takes a minimum of ten (10) years and millions of #aira to train a priest in the Major Seminary up to ordination. Therefore, to allow this human capital investment be cheaply exposed to the bullets of some unmerited dregs of the society smacks of negligence.
The Catholic Church could not have ordained their priests to be used as sacrificial lambs at some terrorists alter of martyrdom hence it behoves on the Catholic Bishops Conference of Nigeria (CBCN) to as usual live up to its calling by calling off the lamentation and change strategy ]

INTRODUCTION
Nigeria’s Catholic Priests are running for their lives in fear of the rampaging terrorists, kidnappers, and gunmen who hunt for them like wild life for the game.
This is reminiscent of the ‘head hunters’ years of the primitive society, except that what obtains today is that the head of a Catholic priest is more of gold mine in $dollars value rather than the mere prestige of a warrior’s total number of collection of human heads as sign of bravery and.

Hardly any day passes by without reports of missing, kidnapped, or killed Catholic priest (s). Sadly, our churches have become more of places of requiem, funerals, Lamentations, burial sing songs and homilies for slayned priests instead of other forms of worship. Regrettably too, the cemeteries are fast becoming larger in acreage than available farmlands for agricultural purposes, while coffin construction is now such a lucrative business for survival in this period of Buharianomics, making carpenters keep smiling to the bank.

As a consequence of this alarming rate of killing of Catholic Priests across Nigeria, thousands of Catholic faithful, the Pope, Bishops, priests, religious, and concerned citizens have expressed their dissatisfaction with the federal government over its inability to protect lives and property of the citizens – Catholic Priests inclusive.

This discourse is an attempt to highlight and contribute in the on – going efforts to further encourage the Catholic Bishops on to a higher notch of responsibility and action in order to curb the rising spate in violence especially to our humble, esteemed and honoured Catholic priesthood.
Permit me at this juncture to plead for penitential amnesty for any sins I may commit in the course of this presentation, and if committed, may it be considered as a ‘holy sin.’

THE SITUATION ROOM
It takes a minimum of ten (10) years and millions of #aira to train a priest in the Major Seminary up to ordination. Therefore, to allow this human capital investment be cheaply exposed to the bullets of unmerited dregs of the society smacks of negligence.
Invariably, the Catholic Church could not have ordained their priests to be used as sacrificial lambs on a terrorists alter of martyrdom, hence it behoves on the Catholic Bishops Conference of Nigeria (CBCN) to as usual live up to its calling.

According to a report from findings by the International Society for Civil Liberties and Rule of Law sent to the Agenzia Fides’ agency, at least 70 priests and religious were kidnapped, or killed from June 2015 – March 2020. These casualty figures had since risen higher and higher from March 2020 – June 2022.

As a result of these rising cases of killings, kidnapping, and attacks, thousands of Catholic faithful and concerned citizens have always flooded Nigeria’s streets in protests against the pogrom.
One of such protest rallies was led by all black attired Cardinals and Archbishops, followed by priests, religious, lay faithful, and the general public in Abuja on March 1st. 2020.

You would also recall that the fiery Sokoto Diocese Bishop Matthew Hassan Kukah, John Cardinal Onaiyekan, and other Bishops have been unrelenting on this matter.
While delivering an anniversary lecture at the flag off ceremony of 70th anniversary Logo and Mascot launch of the Order of the Knights of Saint Mulumba (KSM) Nigeria in early June, 2022, Bishop Kukah said that Nigeria now ranked as the 9th worst country for Christians to live in the world. Iran occupies the no. 8th position.

WHAT NEXT ?
(1) Enough of public demonstrations and rallies because nothing seems to be achieved from that so far.
(2) Enough of this ‘call to glory’ advertorials for our killed clergy because that is the indication for the enemy perpetrators success.
( 3) Enough of the elaborate Lamentations during requiem, funerals and burials of our killed clergy. I desire more of strategic planning.
(4) I want to see workable, pragmatic steps from the Bishops on ways to secure our clergy.
It is understandable if they are killed or kidnapped during Mass, but even at that something more concrete can still be done.
Enough is enough.

WHY ARE CATHOLIC PRIESTS A TARGET ?
The killing and kidnapping of Catholic Priests may be attributed but not limited to the following :
(1) The Nigerian government has been unable to provide adequate security for the citizens and as a result there is growing insecurity in the land. Since the terrorists are aware of the weaknesses of the Nigerian state, they attack at will realising that there isn’t really restraining force.
The Nigerian military has been so much compromised that they have become ‘a toothless bull dog’.
Little a whole lot of people including the Catholic Priests are left vulnerable to whims and caprises of the terrorists.
(2) Regrettably, apprehended or the so called repentant terrorists in Nigeria get pardoned and re integrated into the society with due diligence of checks. These repentant terrorists later transform back to unrepentant terrorists to continue to wreck havoc in the society.
Likewise, kidnappers get bread thrown at them instead of bullets fired at them. They in turn use the ransom proceeds to purchase more weapons for more daring expeditious kidnappings and killings – and the vicious cycle continuos.
(3) Terrorist’s religious fanaticism and ideological considerations arising from a flawed teachings, doctrines, orientation, and sometimes indoctrination for hate of any other faith other than theirs on the face of the earth.
(4) The ostentatious lifestyle flownted by (some) Catholic priests may be a source of attraction to kidnappers who end up killing the victim priests even after collecting the ransom.
(5) The religious war of rivalry for supremacy between Nigeria’s two major religions make the Catholic priest vulnerably prone to attacks even to the point of total annihilation.
(6) This may be a manifestation of growing criminality in a Nigeria that lacks a deliberate, workable, effective jurisprundence, and a sustained regime for crime punishment.
(7) Catholic priests are seen as part of a privileged group, and as such, attacks may come as an expression of, or a form of anti – clericalism that is based and fueled on vendetta, or the loss of the sacredness and sanctity of the priesthood as symbolised by the Catholic priest.
(8) Catholic priests (some) drive fine cars, are known to have posh homes elsewhere, and appear to be quite comfortable, and contented.
The kidnappers who are spurred on by the get – rich – quick syndrome and mindset see these priests as ready prey to be pounced upon.
(9) Catholic churches anywhere in Nigeria are among the largest and well built.
This really attaches not only a lot richness of wealth status on their priests, but also attracts some notoriety for flounting that wealth.
And therefore, the kidnappers also want a bit of the action, and a bite of that wealth.
(10) According to Pew Research, the world total population is 7.5 billion.
With a total of global Catholic population of 1.36 billion (baptized only), the Catholic Church no doubt is the largest single Christian denomination, as she makes up to 18% of the total world population.
It is therefore a pride of no mean achievement for any enemy of Christianity to hurt the Christians by getting at the Catholic Church through her priests.

SUGGESTIONS TO THE CATHOLIC BISHOPS CONFERENCE OF NIGERIA
Since the Nigerian government is not doing enough to protect her citizens, the citizens on their part must seek alternative means in order to stay alive. The resentment and awareness must have to build up, and the CBCN is better placed to lead this vanguard.
To halt this endless bloodletting of our Catholic priests is a task that must be accomplished.
(2) All Catholic priests to posses guns for self defense.
(3) All priests to be at Mass with their guns. The CBCN should borrow a leaf from some aspects of the ‘Liberation Theology’ of Latin America of the 60’s and 70’s.
(4) Travel restrictions be placed on priests in and out of their domains ( parishes, dioceses) until some level of sanity is attained.
(5) All parishes, churches, priests homes be guarded by armed men especially on vulnerable days.
(6) Parishioners who qualify to posses guns/firearms be allowed to come to church with such.
(7) Catholic priests to cultivate modest lifestyles and cut down public display of affluence.
(8) Federal government is to put in place workable, tested, legal, and verifiable measures to ensure the security of life and property.
(9) Bishop Matthew Hassan Kukah’s suggestion towards tackling this menace suffices : “…… When a dog is backing at you, walk towards it because if you turn back it would attack.” “…….We Christians must walk towards the barking dog.”
(10) Extraordinary times demand extraordinary response.
Enough is Enough.